Bengaluru, March 19, 2016: Clearance of Real Estate bill in Rajya Sabha is a step towards revolution in real estate industry. The bill is based on three major foundation stones: Transparency, Accountability and Efficiency. Compulsory disclosures and registration ensures Transparency, while taking responsibility in case of any unwarranted deviations in the process ensures Accountability. Together these elements generate Efficiency by discarding any kind of deception in prices. Firstly, it will usher sales on carpet area, which is a practice followed in the developed countries including Singapore and UK. Secondly, the escrow account will help in curbing diversion and misuse of funds, ruling out speculative practices.

Indian economy has opened up to the world about two decades ago, and we do want foreign funds to roll in. Thus with this bill, we are getting closer to global standard and transactions are monitored by a regulator. Moreover, project delays are the Achille’s heel of Indian real estate and one of the key reasons for sky high prices. As far as responsibility for delay is concerned, it lies both with the developer and the Government authorities. Thus, if we look at the larger picture, the delays in execution also have a negative bearing on India’s GDP. Penalties on the builders delaying the projects will elevate the negative bearing and bring positivity in the industry.

The benefits of the bill will be revealed through a domino effect across the sector. From a bird’s eye view, it is quite evident that increased accountability will have positive implications all across the value chain. For instance, with increased disclosures and focus on corporate governance after the establishment of SEBI, the scams in the stock market have reduced considerably as compared to the early 90s

Almost 100% of the unsold stock in these tier I cities fall under the purview of the Real Estate Bill. Only 0.35% of the unsold stock on a Pan India basis remains untouched by the bill, which is a miniscule percentage. Even in the current depressed state of market, about Rs 18, 47,002 crores worth of supply comes under the purview of the Real Estate Regulatory bill. This is only for the primary supply. There also exists a secondary market, which we estimate is of an equal size. So, the quantum under the bill’s ambit is huge.With a vast universe under coverage, the bill will have far-reaching positive effects on execution and accountability.

A nation’s economy has its foundation in consumer confidence. The bill is instrumental in alleviating dwindling confidence and weak sentiment that prevails across the sector. With increased transparency, real estate sector will start to look up and find itself on a global footing.

While the bill protects consumer interest, faster approvals are also crucial for developers to prevent delays.Against this backdrop, regulatory authorities should aim to promote single window system of clearances for real estate projects, wherein the projects and promoters both can be graded along with digitization of land records. 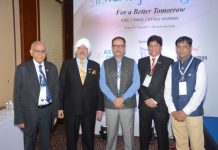