Bhutani Infra, the leading NCR based commercial real estate player received top honours at Estate Awards 2019 organised by Franchise India. In a glittering function organised recently in the national capital, the Company has been adjudged ‘Developer of the Year – Commercial (North)’ and one of its commercial offering in Noida – Cyberthum – the Best Upcoming Project (Asia).

Mr. Ashish Bhutani, CEO, Bhutani Infra received both the awards on behalf of the Company.

Estate Awards is one of the country’s most revered awards that recaps the success stories from the corridors of Indian Real Estate. It honours magnificent brands, projects, as well as the game changers and innovators of the Indian Reality sector.

Commenting on bagging top honours at Estate Awards, Mr. Ashish Bhutani, CEO, Bhutani Infra said, “It has always been our endeavour to offer best of the products in commercial category especially in the office spaces which is accompanied by top notch amenities and comfort & convenience all at one place. Both the awards are a testimony of our effort. I thank all my stakeholders including channel partners, suppliers, vendors and our employees for their immense contribution and unflinching support.”

Backed by a decade of experience and insights, the Bhutani Group is a leading name in conceptualizing and execution of upscale real estate projects in the retail, commercial segments which includes the most advanced IT office spaces.

Located in Sector 73, Noida, Cyberthum is an architectural marvel, which is one of the tallest commercial offering in the entire country. Spread over 27 acres of mixed used development, Cyberthum boosts of a helipad, North India’s largest musical fountain and ample parking spaces among others. 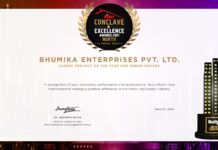